DOWNLOAD YOUR FREE DIGITAL COPY OF LUFTWAFFE: SECRET JETS OF THE THIRD REICH

Dan Sharp’s authoritative writing on the subject of Second World War jet fighters has resulted in printed copies of this publication selling out rapidly. But you can download a FREE digital version of Luftwaffe: Secret Jets of the Third Reich in a few easy steps.

Simply fill in the form below to get access to a FREE digital download of this fascinating insight into radical German aircraft designs. 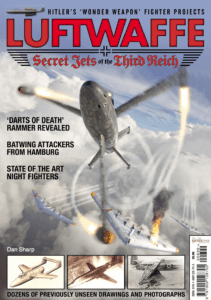 The last 12 months of the Second World War saw Germany being bombed day and night by the USAAF and the RAF, and constantly overflown by high-flying high-speed de Havilland Mosquito reconnaissance aircraft. Even the Messerschmitt Me 262 jet fighter and Me 163 rocket-propelled interceptors were not capable of defeating these threats so drastic action was called for.

Aviation companies from across Germany set their finest minds to the task and produced some of the most radical aircraft designs the world had ever seen. They proposed rotating wing ramjet fighters, arrowhead-shaped rammers, rocket-firing bat-winged gun platforms, sleek speed machines, tailless flying wings, tiny mini fighters and a host of others ranging from deadly-looking advanced fighters to downright dangerous vertical launch interceptors.

Just fill in the form below and you will be redirected to your digital copy.