Throughout human history diseases have ravaged countries, undermined empires and killed countless individuals – often with drastic and unexpected consequences for the survivors.

Life After Covid-19 by Bob Gordon: Lessons from Past Pandemics, published by Banovallum Books, investigates past outbreaks and their aftermath, drawing parallels with the world of today and examining how it could look when the current pandemic has finally receded.

In the wake of the Black Death (1347-1351), a bubonic plague epidemic that killed a third of Europe’s population, the jobs market was dramatically altered and the grateful survivors inadvertently began a new age of enlightenment. The plague’s re-emergence in London in 1665-1666 made people suspicious of one another and encouraged an attitude of selfishness, but also helped to lay the foundations for stronger local government. 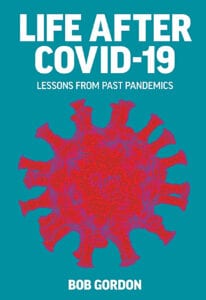 Yellow fever and typhus changed the world in the early 1800s by ending Napoleon’s imperial ambitions, while the horrors of ‘King Cholera’ later that century set the stage for much improved urban planning and hygiene.

The Spanish flu of 1918-1920 savaged nations already reeling from the Great War, deepening the economic damage, while more recent outbreaks such as SARS, MERS and ebola were the warning signals that the world failed to heed.

Finally, Gordon looks at the current pandemic and weighs up its likely long-term impact on retailers, the entertainment industry, airline travel, education and the global balance of power.

Life After Covid-19 by Bob Gordon: Lessons from Past Pandemics, published by Banovallum Books, an imprint of Mortons Books Ltd, is available to order for £14.99.