KIDNAP AND MURDER OF TEEN REVISITED 45 YEARS ON

The kidnap and murder of Shropshire teenager Lesley Whittle 45 years ago is re-examined in a new book by author Michael Cowton.

Murders That Shocked the World – Cases from the 1970s, published by Banovallum Books, brings together the stories of the decade’s worst crimes, including the callous murders committed by Donald Neilson, aka the Black Panther.

Career criminal Neilson, a veteran of more than 400 house burglaries and several robberies, during which he had murdered three people, kidnapped 17-year-old Whittle from the bedroom of her family home in Highley on the night of January 14, 1975. 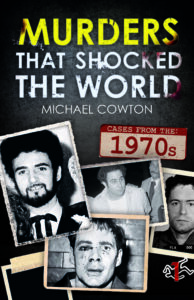 He demanded a £50,000 ransom but an attempt to pay failed. Whittle’s body was found hanging from a wire around her neck at the bottom of a draining shaft in Bathpool Park, Kidgrove, Staffordshire on March 7.

In Murders That Shocked the World – Cases from the 1970s, Cowton follows the investigation which eventually led to Neilson’s capture. He also examines the horrific stories of monsters such as Peter Sutcliffe, David Berkowitz, John Wayne Gacy and Ted Bundy.

About the Author: El Armstrong