FIVE FACTS ABOUT THE T-34 TANK

When the German army launched Operation Barbarossa – the invasion of the Soviet Union – on June 22, 1941, they received a nasty shock when they came up against the T-34. Nearly 80 years after the first T-34 was produced, author of new Mortons book Designing the T-34, Peter Samsonov, outlines five facts about the revolutionary piece of Russian engineering which was hailed as “the finest tank in the world” by German Field Marshal von Kleist.

THE T-34 WAS ACCEPTED INTO SERVICE SIGHT UNSEEN

The T-34 tank was accepted into service on December 19, 1939. At that point, assembly of the A-34 prototypes had not even started. Only trials of an A-32 tank loaded down to the required weight proved that such a vehicle was possible to produce. As a result, some of the requirements listed in the acceptance order, such as the F-32 gun, were never actually met.

Despite being a planned economy, the USSR still cared a lot about money. The T-34 was designed from the ground up to be an affordable replacement for the BT-7 tank, but ended up costing more than three times as much! Measures had to be urgently taken to improve co-operation between different factories and drive the price down. 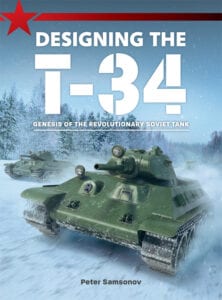 Many origins have been attributed to the tank’s index, from homage to Georgian Bolshevik and Soviet politician Sergo Ordzhonikidze by the tank’s designer to the designation of the gun it used. In reality, none of these were true. The number 34 is merely the sequential index of the prototype produced at factory #183.

Requirements for a tank approximating the T-34 were first composed in April 1937. Initially, the tank was supposed to have many features for city fighting, such as 70 degrees of gun elevation and a rear-facing flamethrower or machine gun, but these were dropped during the actual development.

Before the T-34, armour plates for Soviet tanks were comparatively expensive to produce and used a large amount of deficit alloys. For a new tank, it was necessary to develop a new kind of armour that could be produced using industrial by-products and recycled materials, rather than brand new ingredients. The research laboratory at the Mariupol Factory spent years designing a new kind of armour plate that was both cheap to produce and would not crack or splinter under heavy attack.

Designing the T-34 is a new book from renowned author and historian Peter Samsonov, creator of the Tank Archives blog. The book uses original wartime documents to explain how the Soviets came to develop what was arguably the war’s most revolutionary tank design which was more than a match for the best German tanks.

For more information about the ground-breaking T-34 tank, order your copy of Designing the T-34 for just £12.99.