Thirty years on from the release of the enlightening book Scooter Boys, author Gareth Brown celebrates this milestone anniversary with a fresh, in-depth look at the iconic scootering scene and the evolution of the species.

Over the last three decades, Scooter Boys has inspired generations of scooter boys and girls, while constantly acting as a scootering bible for those who have embraced the scene; past, present and future.

The strong underground scooter scene, classic Italian models such as Vespa and Lambretta, plus the 1960s and 1970s are all explored and celebrated within the insightful 150 pages written by scooter rally fanatic Gareth.

Using fully revised and updated text plus thoughtfully selected photos, the celebratory Scooter Boys: The Evolution of the Species shines a new light on scooter boys and girls, while paying homage to those who have shaped the scooter scene since the Sixties into what it is today. 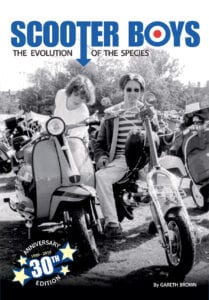 Following on from the previous 30 years, Brown’s new work continues to be a celebration of the underground strength of the scooter boy and girl, through the 1960s and 1970s to the identity it enjoys today: it traces ‘The Evolution of the Species’. The 30th anniversary special brings the subject matter back on the map by looking at the weekend nomadic nature of the rally-going scooter rider, their music and their compelling way of life.

In the words of author Gareth Brown: “Scootering is more than an irresponsible interlude of the growing-up process, it is an all-absorbing way of life. To be involved is to understand; to observe is to envy…”

For more information about Scooter Boys, order your copy for just £14.99.